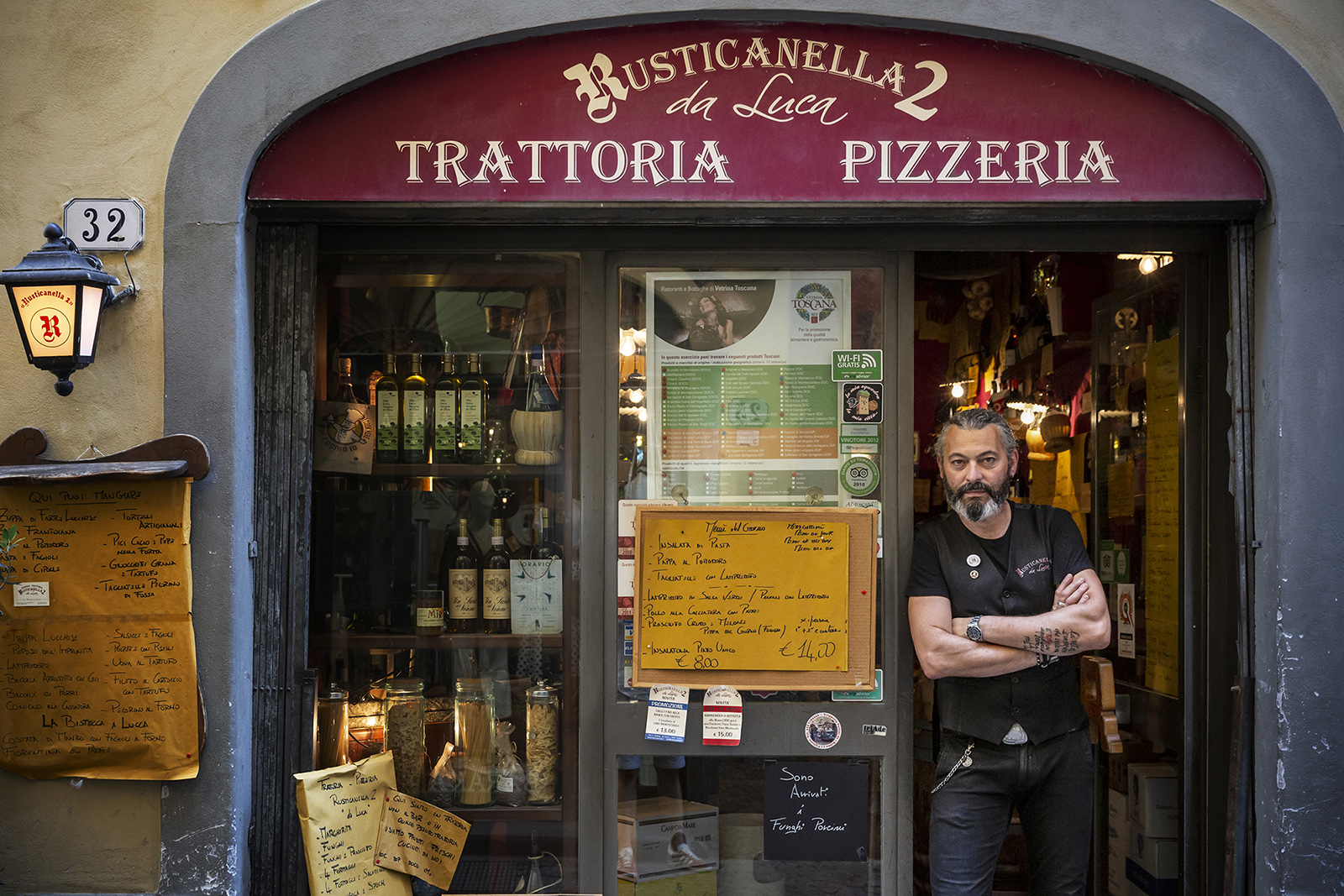 Our restaurant is located in the centre of the old town of Lucca, surrounded by an unbelievable variety of sightseeing attractions that you will encounter just making your way to us. If one thing deserves a mention here, it has to be house where Giacomo Puccini, the composer of world-renowned operas as “Tosca”, “Madama Butterfly”, “La Bojè” and more, was born, just a few steps away from our restaurant. If you wish to round off your meal with a digestive stroll, you will find many more things to discover in the immediate vicinity: the San Michele church with its attractive square, Piazza Napoleone and the palace built for Napoleon’s sister, the many old fountains from witch crystal-clear water still flows, San Paolino, the only Baroque church amongst all the city’s Roman churches, the 2nd-century Roman amphitheatre on whose walls apartments now stand. And once you have had enough of the architectural sights and are simply longing to be in leafy surroundings, nowhere in the city is far from the city wall as the wall sorrounds the entire city. You should not miss taking a little walk on this tree-lined city wall, on which extensive lawns are laid out and enjoyed by the Lucca locals for relaxation, sport playing and chatting. 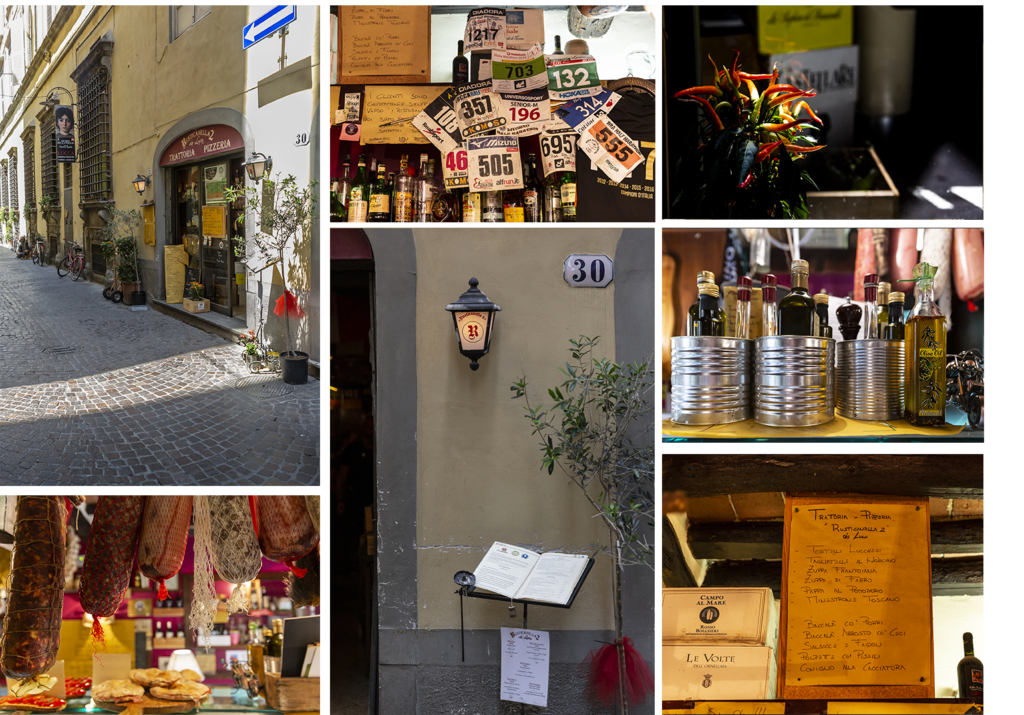 Our lunch menus, which are highly appreciates by tradesmen, young people, but also by turists and Lucca locals, boats a price/performance ratio that cannot be beaten (currenty Euro 11.00). It is rather tricky to pick out a selection of specialities, since in fact every dish is a speciality of the master chefs. We can certainly be proud of our Florentine-style beefsteak: a T-bone beefsteak, weighing at least 1,000 g, two to there fingers high? – this is the regulation one needs to meet in order to call one self “Fiorentine“!Our restaurant is recommended by Vetrina Toscana in recognition of making use of Dop, Docg and Itg products in our kitchen. Besides Lucca’s famous extra virgin olive oil, you can choose among more than 35 sorts of wine, mainly from Tuscany. 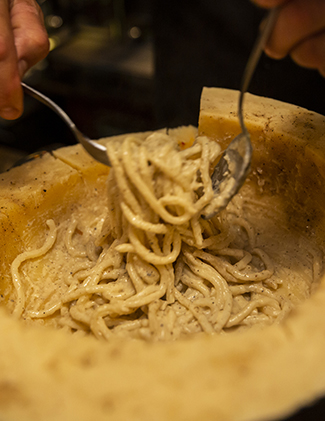 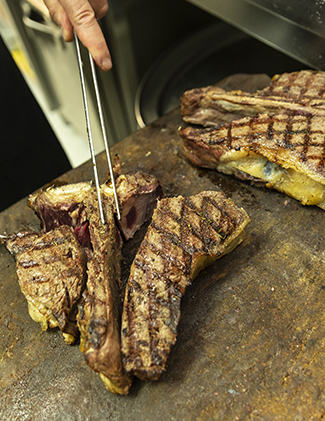 Bodily comforts have been catered for the location since 1920. Back then the restaurant was called an “Osteria mescita vino” – a guest house with a licence for selling wine. It provided simple meals from Lucca and thesurrounding area: spelt soup, trippa, tordelli. 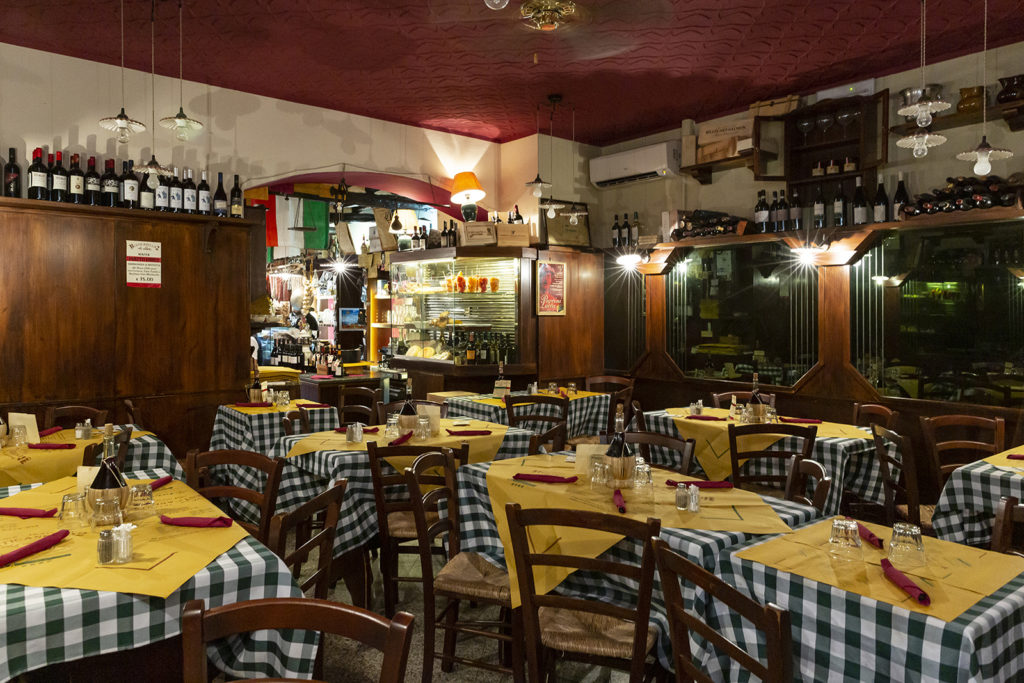 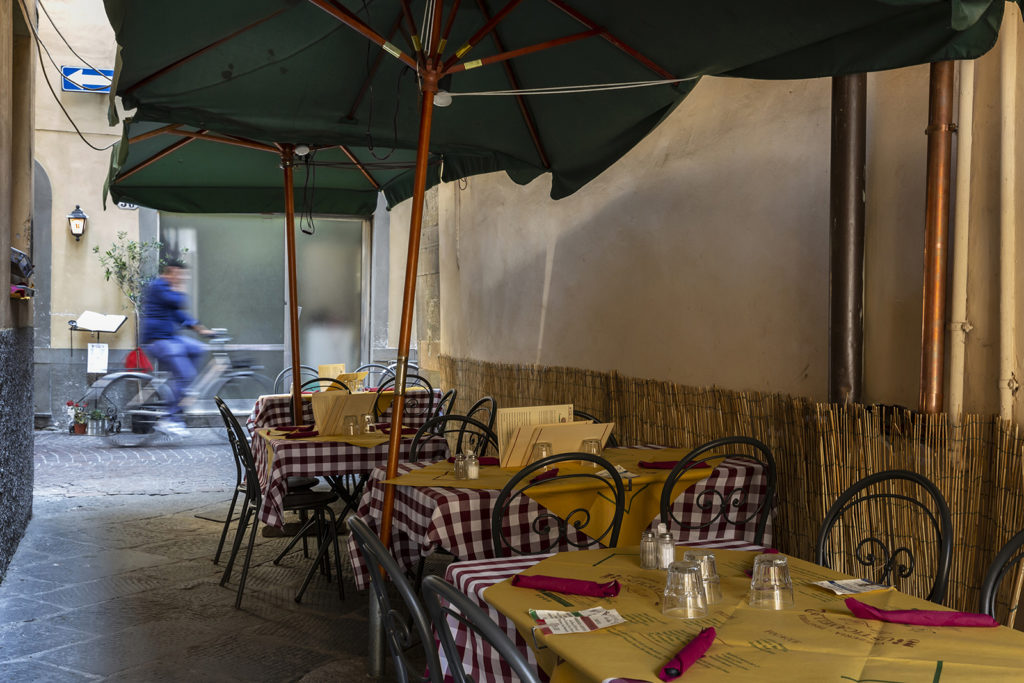 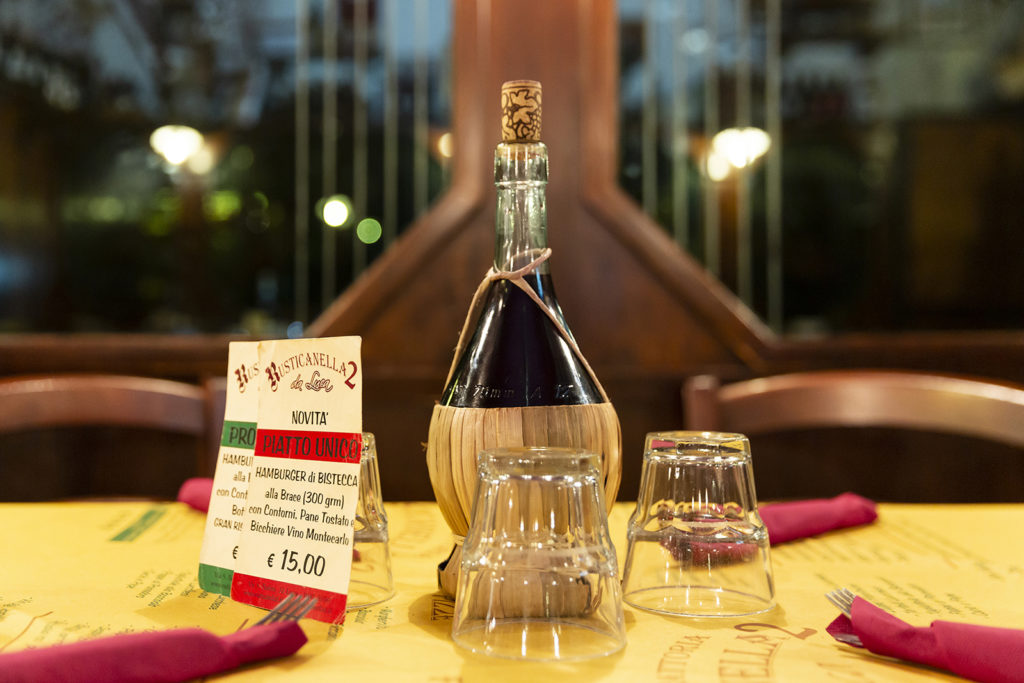 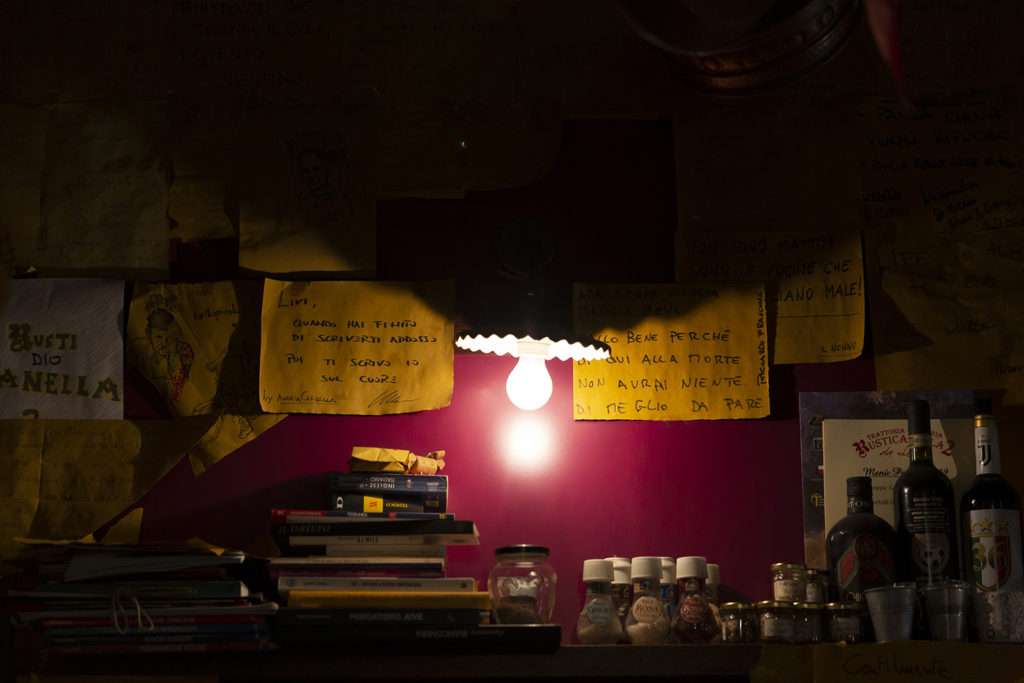 LUCA AND IS OWN STORY 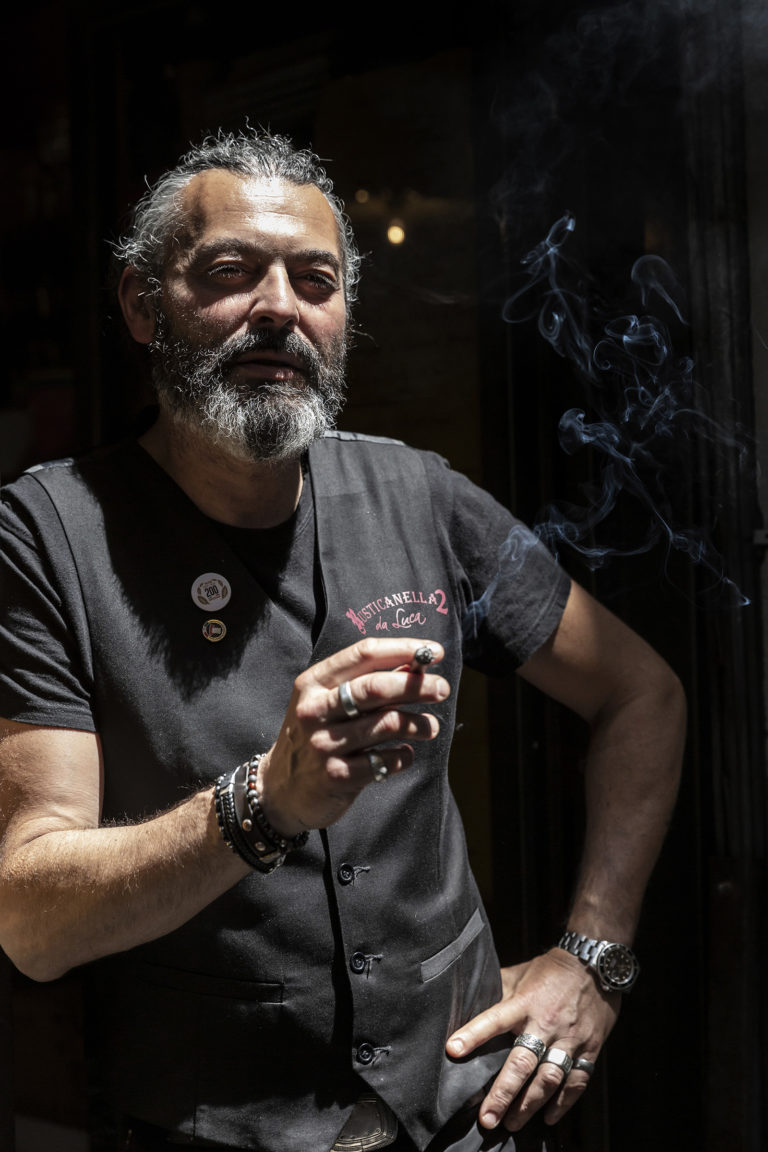 Signor Onorato, a city legend who had arrived from Naples to seek his fortune, took over restaurant in 1960. Many years after his death, Lucca locals were still buzzing about his pizza and tordelli, claiming them to be best for miles around. In 1990 two bold young men, both named Luca, took it upon themselves to re-open the restaurant – absolutely determined not to fall short of yesteryear’s good reputation in any respect. Since then, Lucca locals and tourists have been flocking to the restaurant all year round to get another taste of an incomparably crispy pizza. Along the way, old-time Lucca recipes have been reprised, others rediscovered by word of mouth, and added to the menu. It has also been possible for a number of years now to eat outside during the summer months: there are seats for approximately 24 people beneath the big bright parasols in a petty little lane opposite the restaurant. Naturally, these tables are always highly coveted!

Luca Nelli has been charge of the kitchen since 2006, supported by kitchen and wait staff who perfomr their craft with passion. Whenever the impassioned chef can spare a minute he comes to his guests to enquire after their satisfation, to chat with friends and strangers: hospitality is not only his byword, it is something he redefines on a daily basis.

The demand for the dishes prepared on the grill so outstandingly by Luca Nelli is so great that, in addition to various varieties of meat, genuine Florentine style beefsteak, done only as Tuscanians know, is now also prepared here. Another of restaurant’s specialities is our tagliata, a pice of grilled beefsteak (min. 500g for 2 persons) that is cut into chunky slices and garnished with delicacies that originate exlcusive from the surronding area, such as rocket and parmesan, or rosemary needles and bacon from Colonnata and much else. We would also like to mention that we have put together specifically for children. It goes without saying that the prices are smaller here as well.

Any cookies that may not be particularly necessary for the website to function and is used specifically to collect user personal data via analytics, ads, other embedded contents are termed as non-necessary cookies. It is mandatory to procure user consent prior to running these cookies on your website.